We Are Spock – Remembering Leonard Nimoy

“Spock: Do you believe in the concept of service to mankind?

Nimoy: I think so.

Spock: Then perhaps you are here to be of service.”

“The show has certainly given me a sense of self-worth and particularly the relationship with the character of Mr. Spock has given me a constant guideline for a dignified approach to life as a human being.”
Leonard Nimoy – I am not SPOCK

Spock has been with me for as long as I can remember. Unlike other characters from movies or comics, Spock was someone I identified with from my first encounter, and that impact has never faded. Throughout my childhood, Spock set the standard for how to remain calm in a moment of crisis, especially for an overly sensitive kid. But foremost, he taught me to control my emotions when life seemed overwhelming. To maintain an ability to step back and survey the situation from afar, allowing for a more reasonable judgment. He was also the quintessential outsider, being half Vulcan and half human, never fitting in with his home world, and yet also being an alien on the Enterprise.

I was a sensitive kid in Texas, raised to hunt and kill animals as a rite of passage, so I identified with his struggle. The contrast of growing up obsessed with Disney movies of anthropomorphized animals, yet having to hunt them in real life, was a conflict I could never resolve. Spock at least provided a role model, which was far better than the “pray about it” resolution I was taught at First Baptist Church.

This weekend, on the passing of Leonard Nimoy, I read numerous eulogies, most stating the same thing: that in spite of Spock’s emotional distance, his character was the true heart of Star Trek. I fully agree. 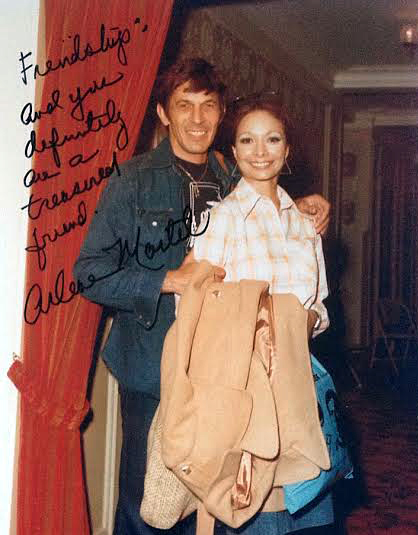 My friend Arlene Martel, the wonderful actress who played Spock’s wife T’Pring, gave me this great photo of her leaving the studios where she ran into Nimoy.

It’s strange to feel moved by the death of a celebrity. The Spock side of me says, “But Jeff, you didn’t even know Leonard Nimoy. Sure, you have read his memoirs, and you even came close to meeting him, but you didn’t actually know him. Your emotions aren’t logical.” Yet I can’t shake the malaise that has lingered since I woke on Friday with the news of his death. Unlike most celebrities, Leonard Nimoy and Spock are inseparable. He not only played the role, but he also helped develop it over the course of the series. Throughout his life, Nimoy grew to accept that connection to Spock as a gift and responsibility, rather than as a burden. The magnitude could be overwhelming at times, but it offered him the unique ability to be of service to mankind. This weekend, it has been a relief to read so many personal accounts of his kindness and humanitarian work throughout his life. There are endless personal stories of small meetings that people cherish and hold sacred. His legacy transcends Star Trek, and yet he will always be Spock.

I have had a few moments of seeing Leonard Nimoy in person but interestingly enough, they have come through the art world rather than Trek.

In the early 2000s when my painting career was active, the staff of the gallery I showed with, knowing I was a Trekkie, mentioned that Mr. Nimoy and his wife had stopped by the gallery on a few occasions and had seen my work while it was installed. I had no hope that I would ever be fortunate enough for them to purchase something, but for years I harbored the dream that I would at least be able to have my photo taken with him in front of one of my paintings.

The first time I saw Mr. Nimoy was when he and the actor Zackary Quinto, who plays Spock in the new movie series, conversed on stage at The Hammer Museum to discuss Nimoy’s body of photographs, Secret Selves.

The conversation was enlightening, since the project involved the Jungian notion that everyone has a “secret self,” which of course plays well into the roles of an actor, but more importantly of Mr. Spock being half-human, along with his repression of his human side. Quinto and Nimoy spoke of their own concepts of bringing that secret self to the role of Spock, and how important that awareness is. On stage, their camaraderie was wonderful to see, since it was clear that in spite of their age gap, they were actual friends in real life.

A year later, I was standing near The Hammer Museum when I saw Mr. Nimoy walking quickly towards me. As he passed, I said “hello” and flashed the Vulcan greeting. He smiled as he kept moving.

Most recently, my work as an art handler brought me even closer. I saw that we had a delivery of artwork scheduled to the home of he and his wife, Susan Bay, so I stressed that I needed to be on that job.

This past December 2014, I was nervous as my co-worker Peter and I parked the company van in the driveway of the nice home in Bel Air. Preparing myself for disappointment, I mentally repeated that Mr. Nimoy wouldn’t even be home, or if he was, we wouldn’t see him.

His kind assistant greeted us at the door as we brought in the small sculpture and proceeded to quietly unpack it, while the she mentioned that Mr. Nimoy hadn’t been feeling well lately due to a cold that was going around. While working, I had a few moments to glance across the living room, relieved that the home was stylish yet understated. As an art handler, it’s far too common to visit homes that are over-designed with the intention to impress, rather than provide comfortable living. The art was also impressive; well informed and contemporary, but not trendy. It was also slightly over-hung, which implied that Mr. Nimoy and his wife were passionate about the art, rather than storing more things away for the sake of clean design. These are all traits that impress me both as an artist and as an art handler.

As Peter and I quietly unpacked the sculpture, we heard a noise towards the back of the living room. I glanced up to see Mr. Nimoy standing at the door, solemnly watching us. Peter later described it as the look of a leopard watching his prey, but I saw it as the curiosity of “Who are these strangers in my home?” When we made eye contact, my heart jumped as I heard his unmistakably sonorous voice say, “Hello.” I simply responded the same before he walked off into the adjoining room to sit down on the sofa and begin working on his iPad. I realized that for those few seconds, I had been holding my breath.

Soon after, as Peter and I finished our job and had the assistant sign our paperwork, she handed us each a $10 tip. Mine was in the form of two five dollar bills which I immediately folded and stored in a pocket of my wallet, intent on never spending it. I knew that I would have to use it in an artwork since it had been anointed by Spock.

For the past few years, my re-immersion into Star Trek has changed my creative focus. My original goal as an artist was to simply make something satisfying to myself, and ideally have someone appreciate it enough to want to live with it by spending money, which would allow me to continue the process. When I left New York in 2007, I consciously broke that pattern.

When I attended my first Trek convention a few years ago, I learned what it was like to make a costume which not only brought joy to me as a creator, but also the pleasure of interacting with other fans. It was as if my painting had come to life, and I had to responsibly play a role while wearing it. Those moments allowed me to truly understand that making many people smile far outweighed the simple pleasures that only the few had previously enjoyed. 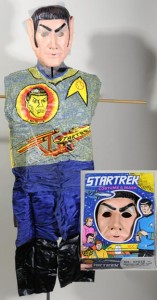 The Mr. Spock costume manufactured by Ben Cooper in the 1970s.

I continue to search for ways to integrate my costuming and love of Trek into something larger, which will keep me active and inspired beyond the usual deadlines of conventions, which has included starting a series of paintings based on the 1970s Spock kid’s costume from Ben Cooper. 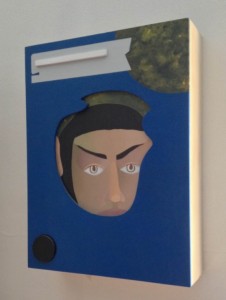 For the past few months, I have also worked on my solution for the Spock money, practicing on actual non-sanctioned bills as I transformed Abraham Lincoln into Mr. Spock. Having two bills offers me the benefit of drawing both the good Spock and the evil Spock from the Mirror Universe, as seen in the episode “Mirror Mirror.” As I developed the drawings, I imagined the approving nod of Mr. Nimoy as the drawings conceptually fit into the role of Spock’s Secret Self. 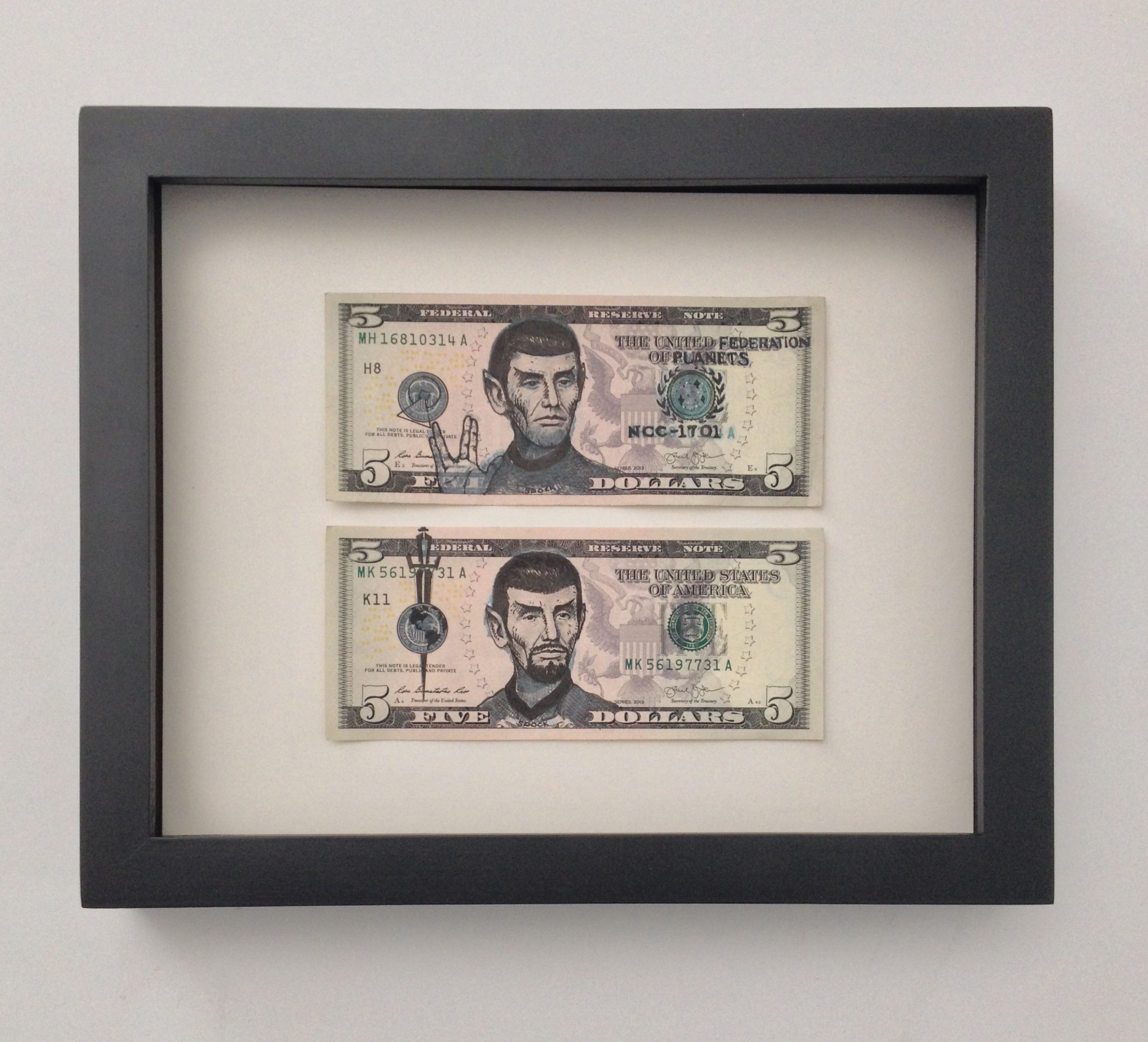 My first study for the Lincoln/Spock bills using archival ink.

After practicing on multiple five dollar bills, I realized I was accumulating a stockpile of Spock money that could ideally be spread around the world, making someone smile or just curious about the impulse to transform the stoic Lincoln into the traditionally pensive Mr. Spock.

Leonard Nimoy, as humans, we are better off for the time that you spent with us on planet Earth. You will remain alive through your words and deeds, which are scattered across the planet; inspiring, entertaining, and challenging those who look or listen. Spock gave you the role of a lifetime, but it was also something far greater. You were perfectly cast to wear the boots, bringing your own insight and personality, challenging the limitations of the role and making it truly unique to you. You ARE Spock, but you have shown us how we, too, are Spock. We will always be grateful. Live Long and Prosper.

Last week I began writing about the experience of seeing Leonard Nimoy and being given the tip which inspired me to endlessly draw Spock over Lincoln’s face. I made plans to post the bills on the Internet, excited about my drawings spreading Spock around the world. Two days later I woke to the news that he had died. My project has changed from an homage to a eulogy, leaving me emotional and confused. I stare at my drawings of Spock as I search for a way to understand my feelings, and yet I don’t know how to proceed. When I’ve been sad or anxious, I’ve always depended on Star Trek for solace, but now it’s just too soon. I can’t imagine the pain of seeing Spock die again in Wrath of Khan, and understand that he truly has passed away.